Some powerful energy coming in with the Full Moon, October 31st 2020 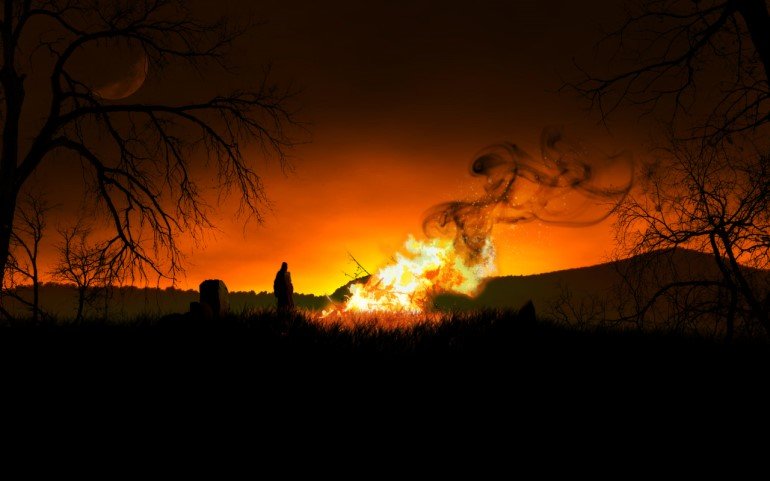 We have a Full Blue Moon falling on the 31st October.. This is also the day we celebrate Halloween or Samhain. It is a time when we connect, honour, and remember our Ancestors. The veil between the physical and Spirit world is thin, this means it is easier to connect. Although the times we are in means that this connection is getting stronger for us all. Samhain also marks the year end in the Pagan wheel of the year, which is focused on the cycles and patterns of nature and the energies that each contain. It is a time to go within, to reflect, reassess, remember and to look to the future. Team that with the energies that we have coming in with this Full Moon and it speaks of Change and Transformation, as well as bringing forward the clarity that many of you will have been seeking with regard to situations in your life. This is the opportunity to let go of the habits, beliefs and limitations you have been noticing and to embrace the knowledge that you have far more power in your life than you may have realised… give yourself some time to consider the choices you have in front of you, you may just be surprised by what unfolds from here.

I am sharing a short article which explains a little more about the energies around this time. This is by Ron Fox,  A High Priest within the Hearth of Wyrd, a Wise Man, a Healer, and a very dear friend.

Much of the history of this festival has been lost in modern times; this particular festival given various names by many cultures throughout the world.

It’s known today by many as Samhain, but also known as, All Hallows eve, Hallow E’en and Halloween. A time when the veil between this world and that of spirit move closer together. In various beliefs it also stood for the end of summer, moving into the beginning of winter, many cultures viewing this as a time of power. Seen as a time when the dark forces of nature and the cosmos take ascendency over the powers light.

In some pagan circles it is viewed as the dark twin of spring the opposing force, light being overcome by darkness. Throughout the world many cultures see it also as a time to honour lost friends and family, past ancestors, also including all that lies within the world of spirit.

The ancient Egyptians and pre Spanish Mexicans were known to have celebrated this time as a festival of the dead; the Celtic New Year was divided into two halves, the light of summer and the dark of winter. The Name Samhain deriving from its meaning (summers end). In this respect their summer ran from Beltane to Samhain, and their winter from Samhain to Beltane. Looked at as a fourfold division of the year, Samhain takes on the roll of the end of autumn. There are various pronouncements of the word Samhain, each differs depending on the area, in Ireland it’s pronounced as Sow-in, Wales as Sow-een and in Scotland Sav-en. The start of each day for the Celt’s began at the sundown of the previous evening; there are many modern festivals still celebrated on the eve of the following day; New Years one that comes to mind. Samhain became associated with consulting and the remembrance of our ancestors,

Seen as a time when the veil between this world and the next were at their thinnest. It became a time for divination, to look to the future and to seek advice and guidance from those in the world of spirit. The natural order turns to chaos and as this happens so do these energies move closer to our reality. For this reason many take to reading the Tarot, runes and many other forms of divination in the belief that it will be more successful when the veils between the various realities are at their thinnest. There are many other folk traditions that abound around this time of year as a festival when lost family members and ancestors were called, it became traditional to celebrate it as the feast of the dead, lost family members. This enacted so those of the tribe and clan could return for this one night to share and celebrate time with their families. Candles and lanterns were hung in windows to guide them home, extra plates were set out on the table and food was put out for any that had died that year or were to be invited into the home that evening.

As the new Christian religion took hold, it found it difficult to stop people celebrating the old ways, the medieval church opting to take on the roll of commemoration of the dead, at least in their eyes not all the dead, but only the blessed and hallowed dead, this meaning (made holy) of their religion. This later became known as All Hallows, Hallowmas, All Saints, and All souls day.

I do love the many forms of divination that have sprung up over time, the many folk traditions such as dripping candle wax into a bowl of water while asking a question, then divining the answer from the shape of the wax set on top of the water.

The apple has long been seen as a fruit of the other world, apple bobbing makes great fun at this festival. When sliced through its equator at night it’s said that if you do this in front of a mirror your future partner will show themselves to you.

Some think that Apple bobbing may be the remnants of the old pagan rite of baptism called ‘seining, the water filled tub perhaps representing the Cauldron of regeneration, this showing many similarities to other types of rites of passage.

Another favourite was to gather Hazel nuts and write on them the initials of some prospective partners then cast them on the fire; the one that popped first was seen to give an indication as to which person this would be.

We also see in modern times the use of Pumpkins this taking precedence over the old Gourd or Jack-o-lantern, perhaps relating to the head, Celts saw the head as a persons place of power, where their spirit resided. The head of an enemy or relative sometimes left in the rafters or buried beneath the floor of the roundhouse or home, the lighted lamp in the window perhaps an old remnant of this practice.

The lamp was also used by people travelling the roads on this night, the ugly face used to scare away any harmful spirits or fairies that might harm or steal them away into the Other World. Set on windows perhaps used as a form of protection for the home and its inhabitants.

Even today this festival still comes under attack from the Christian Church,

Denounced as a Pagan ritual not to be engaged in, I some times wonder if the modern church is aware of the facts of these ancient celebrations, the fact that they were celebrated as a part of the Old Pagan religious rites long before the Christian church born from the Far East settled in Europe. What ever happened to religious tolerance, I’m sure they would not consider publicly demeaning other religious festivals and religions such as Hinduism? Many religions worship more than one God. They see the creative all in duality, as Goddesses and Gods and so on.

That for thousands of years, before Christianity was born, people were aware and considered the dark side of nature and the universe to be as important as the light.

The world is not always sweetness and light, it is only when we acknowledge and understand the dark side of our natures, the world and the forces within this that we become more aware of the light, one without the other would cause imbalance and chaos, it is the constant interaction between these forces that creation comes into being, evolution in action, without these destructive energies there would be no room for the creative forces to grow.

Every thing has its cycle, born from the dark womb into the light of awareness to grow learn and eventually decline into death, to return to the loving and enfolding womb of the creative all and await its time of rebirth. If the soul did not experience darkness and light in life, how would it learn to grow and become more aware and enlightened before returning to spirit? It is the understanding that a balance of dark and light brings us to the knowledge that both are necessary, both of equal importance.

If we are to fully understand the way that life seen and unseen evolves in a place where time has no meaning, the circle of continues cycles, one thing born of another to return in a never ending cycle of creation. Like the sun that lights our planet it was born of a dark star and in time will return to this after collapsing in on itself eventually forming a black hole. Once this happens over time it can no longer withstand the dark emptiness that it has created and again explode into the birth of creative light.

Darkness and death is not an end but a part of a never ending cycle of creation, it is a place of rest, the place of reunion with those that have gone before. It is perhaps a place where the soul may wait for the rebirth that the all has planed for it.

May you find the enlightenment you seek within the dark and light of the All, this Samhain.

Sending Love, light and Blessings to you all xx